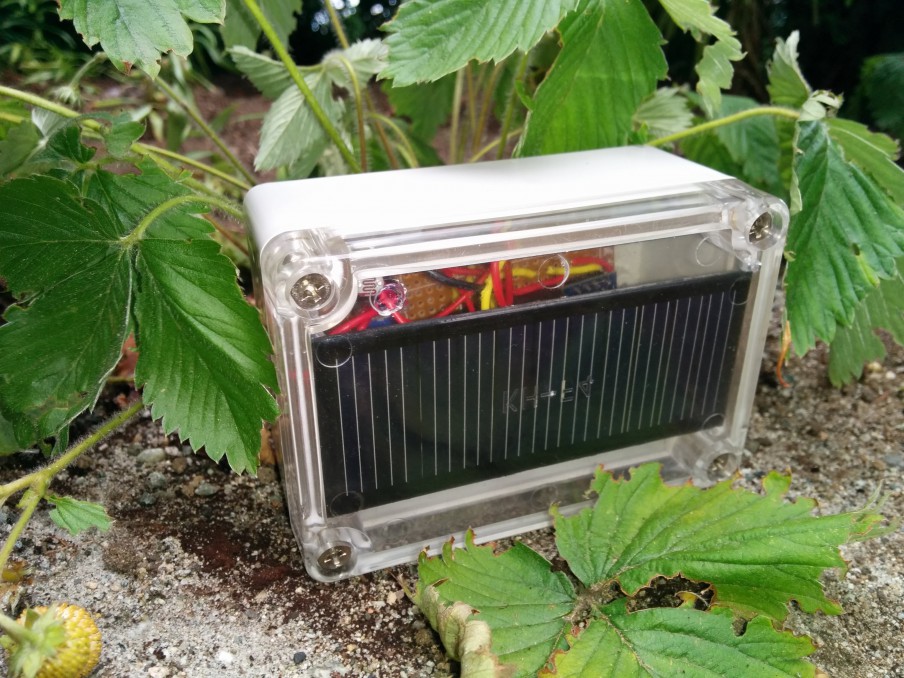 This is the story of a failed weather station upgrade attempt. About a week ago, I looked at my main weather station and I made a list of things I wanted to improve upon. Specifically, I wanted to make it smaller, use a smaller solar panel, and incorporate WiFi. Instead of ordering proper instruments like a thermometer, barometer, ect, I decided not to wait, and simply use what I had on hand. I called this prototype “TinyWeatherStation” and got developing.

To power this smaller weather station I decided to use a 5v solar panel I had laying around, and a single cell lithium battery from my old Blackberry. Once again, I decided to use the LM317 variable voltage regulator to charge the battery. I used a 1k ohm and a 10k ohm trim-potentiometer to set the voltage to 4.2 volts. I tested this setup under a kilowatt lamp and the charging current peaked at about 200mA, very good. The quiescent current was 0.7mA, a great improvement over the 5mA of the old weather station.

The brains of this project would be, once again, an AtMega328. The biggest improvement over the previous weather station was the absence of a secondary linear regulator; the AtMega is powered directly off the battery. Now, this is where things began to go wrong: the headers I used to hold the AtMega were the wrong type. I used these pin headers in the last project, but this time they wouldn’t hold the chip properly. The poor connection somehow increased the quiescent current to 7mA. Bleh.

I actually liked using the ESP8266 module. It was very easy to use; AT commands are easily sent to the module by the AtMega through the SoftwareSerial library. Here’s a diagram of code on the AtMega:

Now… here is where it gets interesting. You can transfer data to a webpage through the URL using GET. Here’s an example URL: http://google.ca/?x=20&y=40&z=30

If you were to load that URL in your browser, it would send a GET request for google.ca, along with the GET variables x, y, and z, where x=20, y=40, and z=30. Essentially, you can transfer variables using a GET request, and the ESP8266 is capable of sending GET requests. I began exploiting this transfer of variables by writing a very simple PHP webpage on my home server. Using the following code, I was able to extract the value for the variable “volt”:

If I were to load that page with a value of 2 for volt in the URL, I would see the number two on my screen. I was able to use the same principle to transfer data from the ESP8266 chip, to a MySQL database. The source code from my project is available here.

Why the project did not work, and what I learned from it:

The main down-fall of this project was the high battery consumption caused by the AtMega, ESP8266, and LM317 charging circuit. In the future I would use a much more efficient switch-mode power supply/charger, and invest in some low-power chips and better headers for said chips. I did however manage to record some voltage data from my balcony before the lithium battery went kaput: