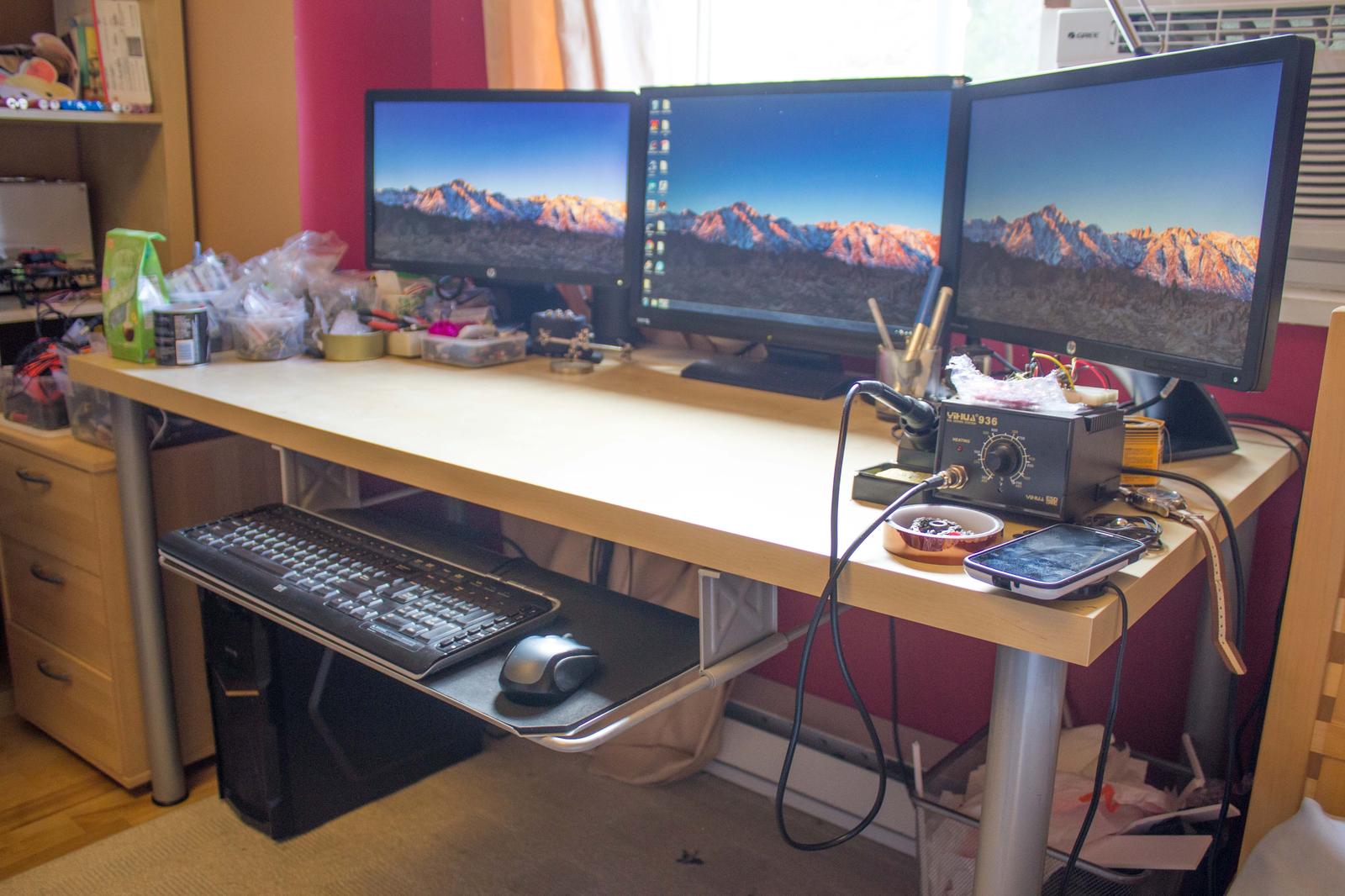 Personal Computer on a Budget

Around mid-summer, my ThinkPad laptop began to show major signs of wear-and-tare. The screen was slowly, but surely, falling off. The performance was not up to par either. Video editing was a nightmare; pre-rendered clips in Premiere Pro were playing back at a very frustrating 21 frames per second. I needed a major performance boost in order to be able to continue making YouTube videos (and to play videogames), so I decided to build a new desktop PC.

I didn’t want to spend a lot of money on this computer, so I tried to cut as many corners as possible by using parts from old computers I had laying around. The total price came out to about $320 USD, or $420 CAD, with shipping included. Here’s a parts list (of the stuff I had to buy) in CAD:

These items either had free shipping to my dad’s PO box in Washington, or were picked up in store from NCIX.

Installing the Motherboard and Peripherals: 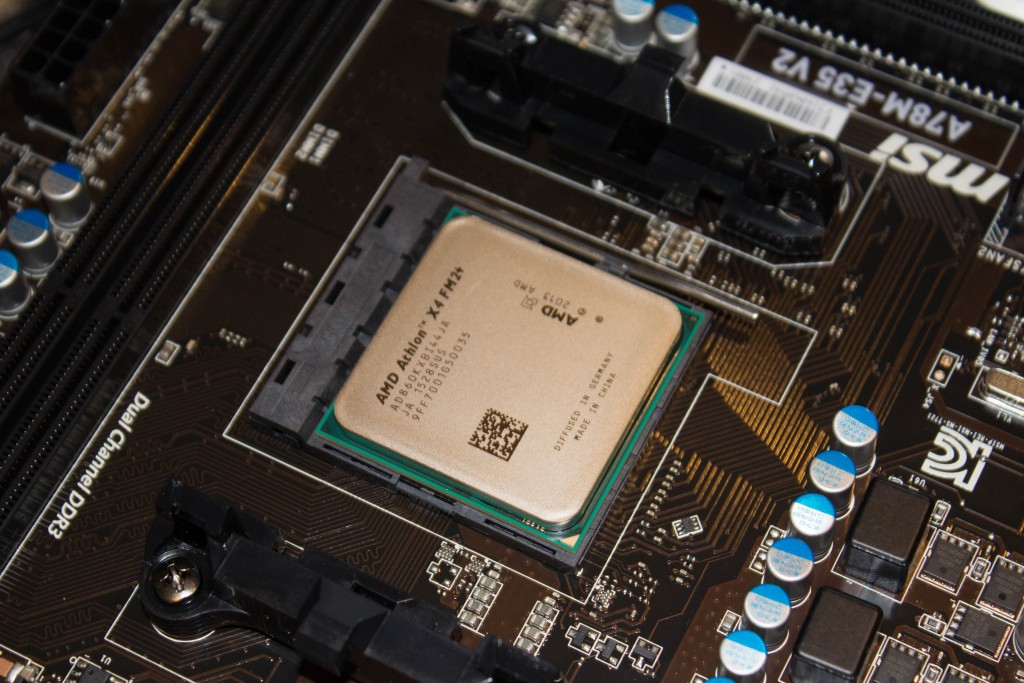 Assembling a computer in today’s day and age is as simple as building something with expensive LEGO. I started out this build by putting the AMD processor into the FM2+ socket on the motherboard. The stock cooler that came with the processor already had thermal compound applied, which surprised me since I was used to applying my own thermal compound to all of the old computers I fix. 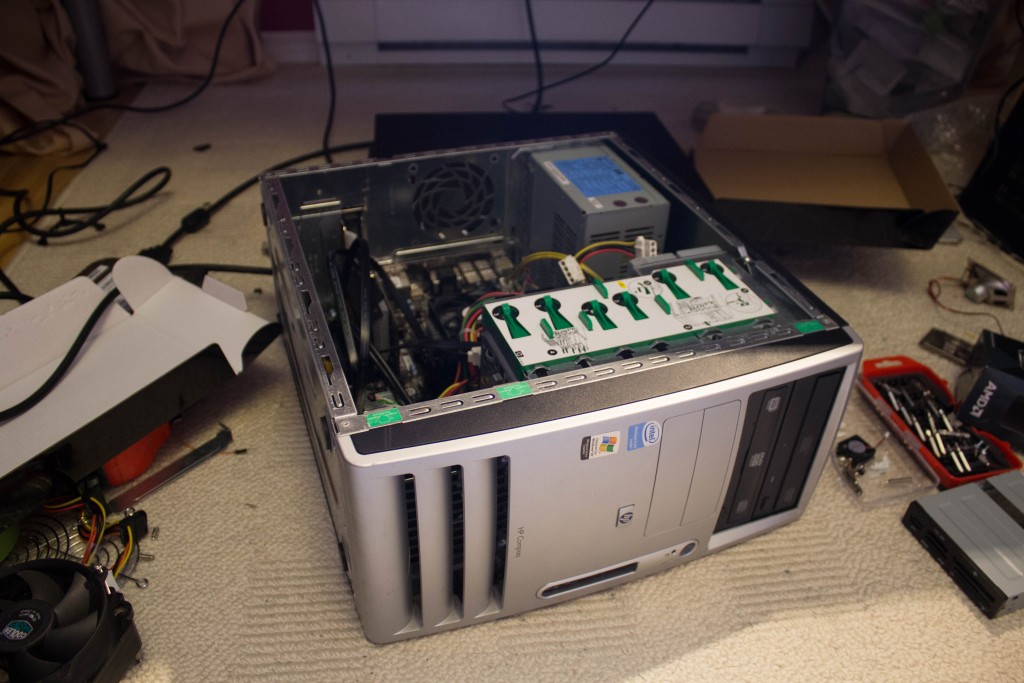 For the case, I went with an old HP Compaq case from some d-series desktop. The case had the mounting holes for an m-ATX motherboard, but it also has some mounting supports for an Intel cooler, which prevented me from mounting the motherboard in the case. Since the supports were made from thin recessed steel, I was able to bang them out with a hammer and install the motherboard.

At this point I also connected the motherboard to the 300 watt power supply that came with the old HP case. 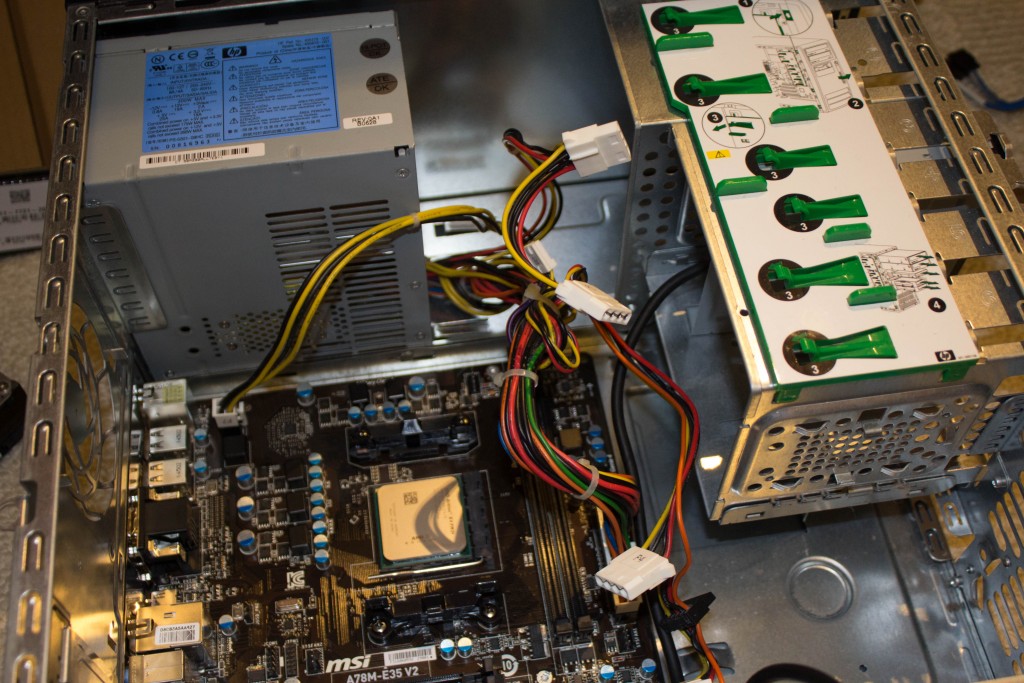 Installing the RAM and Graphics Card: 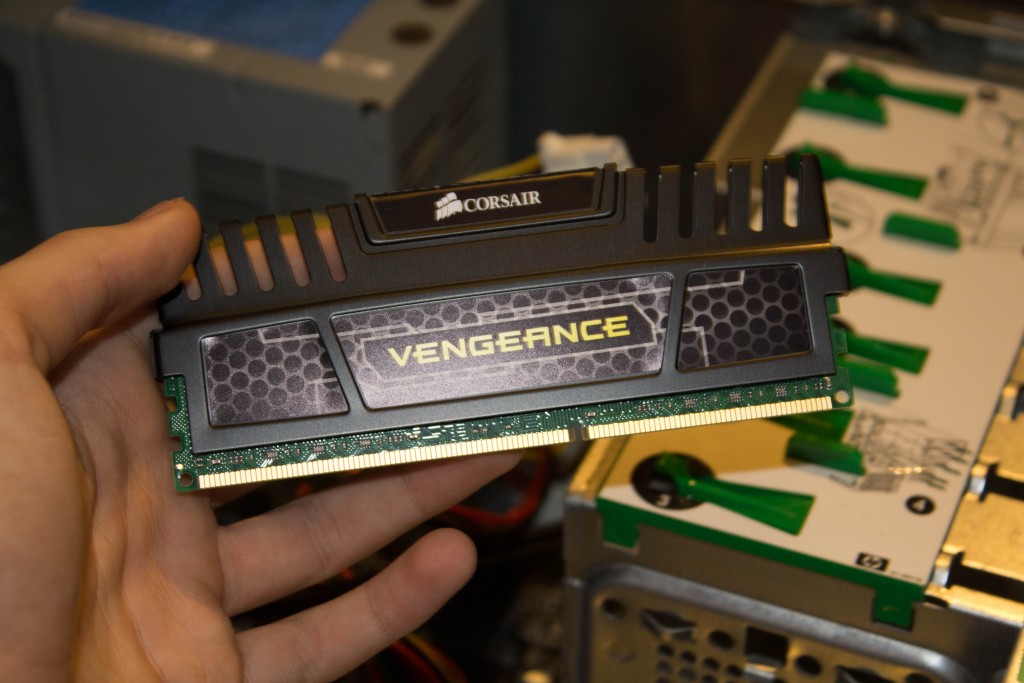 Installing the RAM and graphics card was even easier than installing the motherboard, since all I had to do was align the pins and push them into the appropriate slot. The reason I went with a single stick of 8GB RAM is because I really needed 8GB for video editing. Back on my laptop I was peaking 6 or 7 GB of RAM while multitasking in Photoshop and Premiere simultaneously. The single stick also allows me to upgrade the RAM if I were to need more (my motherboard only has two RAM slots).

The graphics card I chose was the GeForce GT 740. I chose it based off its Passmark rating for both performance and value. Performance was about three times better than the Intel HD 3000 graphics in my laptop, and the value was quite high based on the G3D mark/price chart. However, in retrospect I could have gone with the GeForce GTX 750, which offers more than double the performance for about a $20 increase in price. Oh well.

Installing the Fans and Drives: 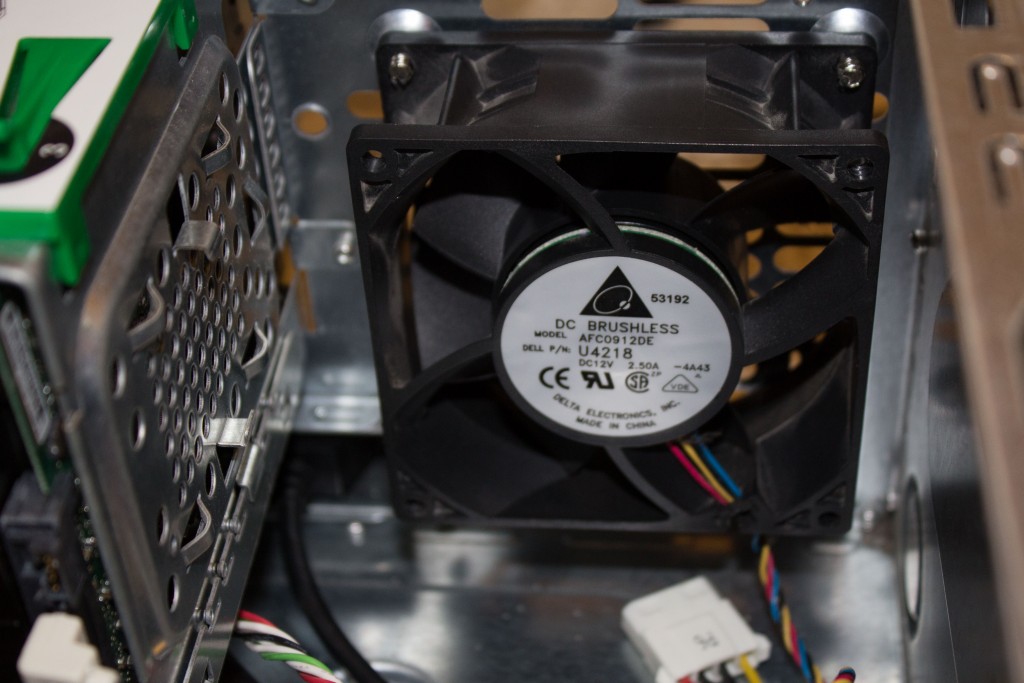 I wanted this system to be very quiet and well-ventilated, so I decided to use the best case fans I could find. For the intake fan I went with a 92mm, 2.5 ampere behemoth, which I plugged directly into the motherboard! Well not really; I measured the peak current of the fan to be less than 1 ampere, and the average current to be around 500mA at full speed. So much for the 2.5 ampere rating… The exhaust fan was a smaller 92mm which was about half of the thickness of the intake fan (because the power supply also helps with the exhaust). That’s when I discovered the only downside of this motherboard… the rear fan connector has no PWM, which means that the fan is constantly at full speed. In order to keep the computer quiet, I tried different fans and used the quietest one.

For the storage, I went with a Samsung 830 256GB SSD, and an old Samsung 300GB HDD as a backup/storage drive. I mounted the SSD using a 2.5″ to 3.5″ inch converter that I bought from eBay for $3. The SSD can deliver read/write speeds of 300Mb/s and 500Mb/s, respectively. I used this drive to house the OS and programs, which made the overall computer very snappy when opening up programs. 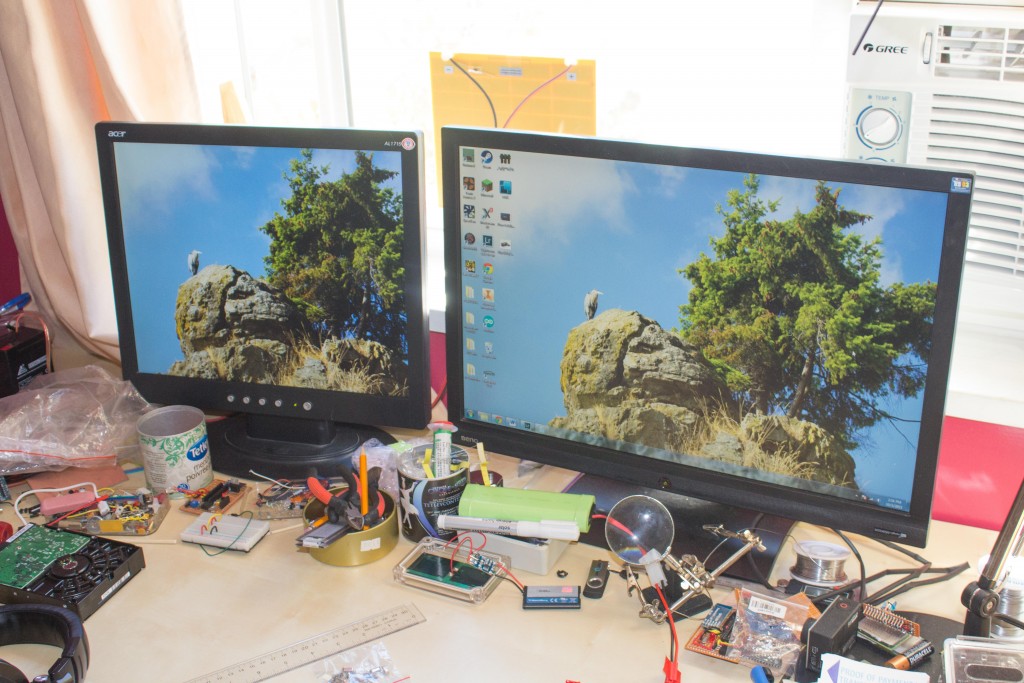 Since the graphics card I used has a DVI and VGA port, I was able to utilize an old VGA monitor and a newer BenQ 19:10 monitor in this lopsided dual monitor configuration. The extra-space is super-useful for multi-tasking, even though the monitors aren’t identical.

For the operating system I went with a fresh install of Windows 7 Pro. I’ve tried Windows 8 and Windows 10, and I could never get used to the look and feel of the system. Plus there is no downside of using Windows 7 for the time being, since most programs support it. 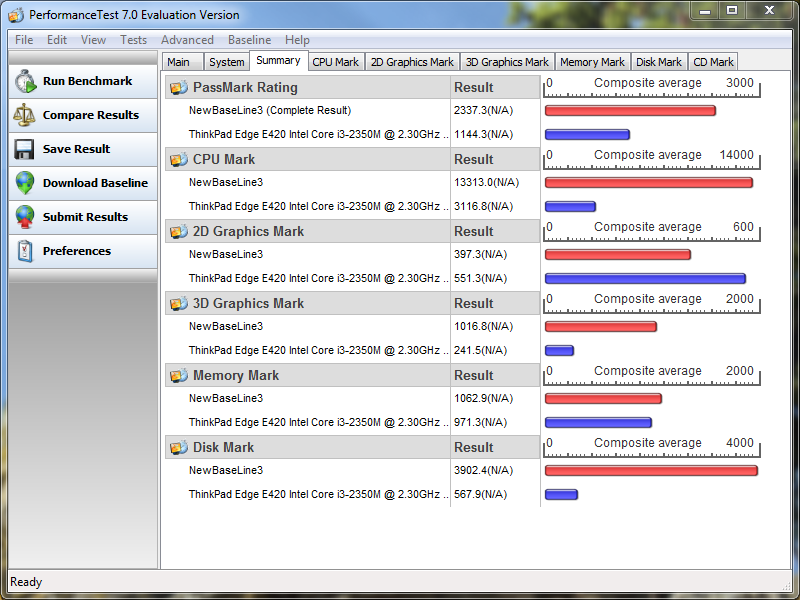 Benchmarks are only useful if you compare them to a result that you already know. Here are the Passmark results for my computer (in red) and my old laptop (in purple). The new $320 PC outperforms the (back then $800) ThinkPad E420 in most categories except the 2D graphics mark. This can be attributed to the Intel HD Graphics in the ThinkPad, which are specifically made for superior performance in Windows, but deliver sup-par performance in video games.

In terms of video-gaming performance, this computer can play Battlefield 3 and 4 at a very decent 40-45 FPS at the “High” preset and Minecraft at 80 FPS on High. These are the only games I have actually tested so far, but games like TF2, Kerbal Space Program, and Left for Dead 2 have no visible lag at the full 1650 x 1050 resolution and on medium settings. Overall, I am extremely satisfied with this computer, and even though the graphics card is not top-of-the-line, this computer should serve me well for the next 5-10 years.