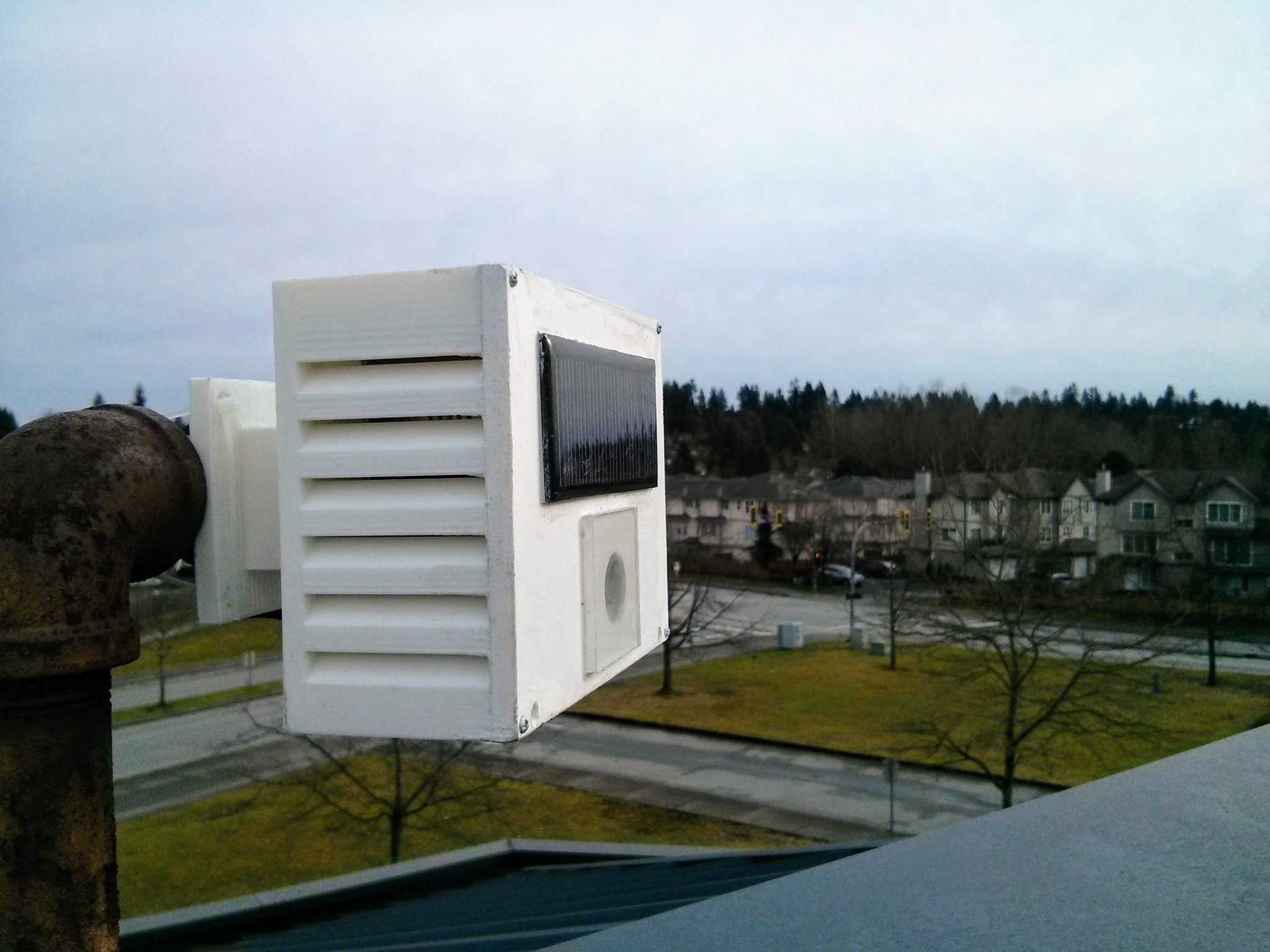 My personal project for my Drafting and Design 11 class was a solar powered, automatic weather station. The goal was to design a small, compact weather station with the following requirements:

I greatly improved the design from my old weather station in terms of efficiency. The weather station has an average power consumption of 340 micro-amperes. The backup battery is also far smaller; only a 1000mAh Li-Po battery from an old blackberry, compared to the old weather station’s 5Ah sealed lead-acid battery. I still used the same wireless 433MHz link for the data however, and that limited my range quite a bit.

In the end, I am very happy with the overall design and build-quality of the weather station. It is currently affixed directly above the tech-wing of my school, and is uploading data to WeatherUnderground every 11 minutes. 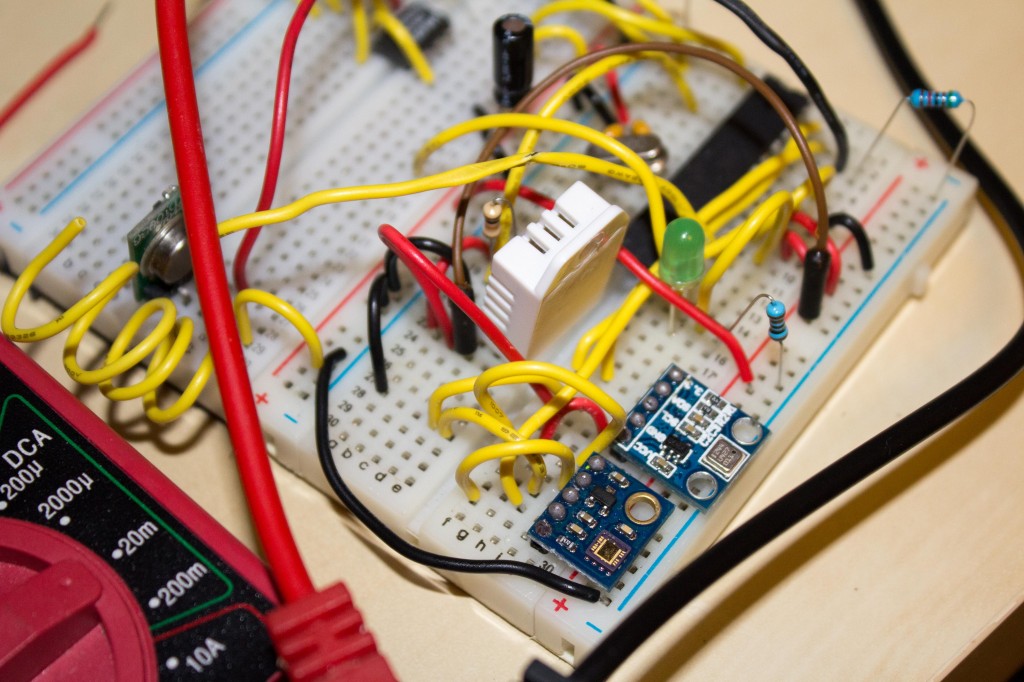 I started the project off by building the prototype circuit on a breadboard. I used all new components, except the 433Mhz radio, which I salvaged off the old weather station. But right before I did that, thought of using the ESP8266 Wi-Fi chip instead. I ran some tests on the chip at my school using a USB to UART converter, and I could not connect to the Wi-Fi network. Even though our network had basic WPA encryption, there was an additional login page after you connected. I could not figure out a way to login to that page, so I decided to use the radio link that I was familiar with.

I connected the new sensors to an Atmega328 micro-controller, and powered everything using a MAX604 linear voltage regulator. This regulator was fairly expensive ($7.00), but it had a VERY low dropout voltage in the mV range, which made it very efficient. I used this regulator to bring the 3.7-4.2V of the Li-Po battery, to a perfect 3.3V.

I decided to use an old blackbattery battery for this project because I had one laying around, and because I knew it had voltage protection circuitry, which would turn off the power when the battery got too low. In order to charge the battery, I went with a TP4056 module. This module is very efficient, and it is able to work off a 5v input. I also had a small, 5v solar panel laying around, which was able to charge the battery through the TP4056 board even in low lighting. Here is the full schematic for the Riverside weather station: 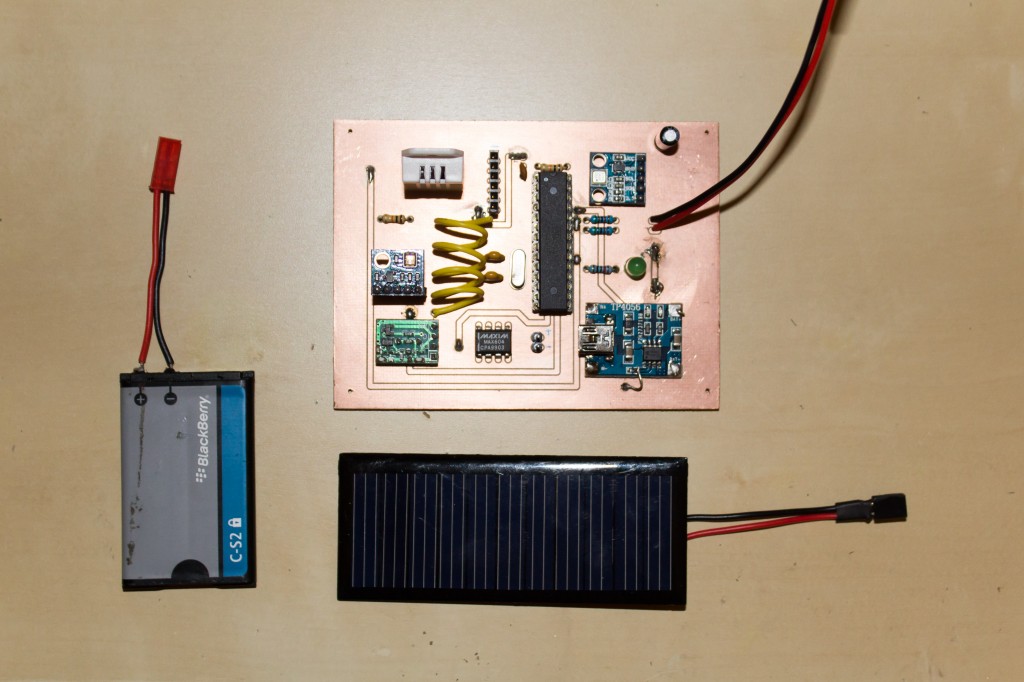 I decided to make the circuit into a PCB instead of making it on a perfboard. A PCB is more rigid and durable than a perfboard, and I wanted this weather station to be my “legacy” once I graduate from Riverside. I took the breadboard design and transferred it over into an Eagle CAD schematic. I had to search for, and even make libraries for some of the components I used.

Once I had everything in schematic form, I transferred it over to a PCB design. I set the border for the PCB to be a 100mmx75mm rectangle, which was the size of the double sided, copper-clad board that I had. Then came the long and grueling task of laying out the components and making the traces. I laid out the components as simply as I could, and this is how it looked like when I was done: 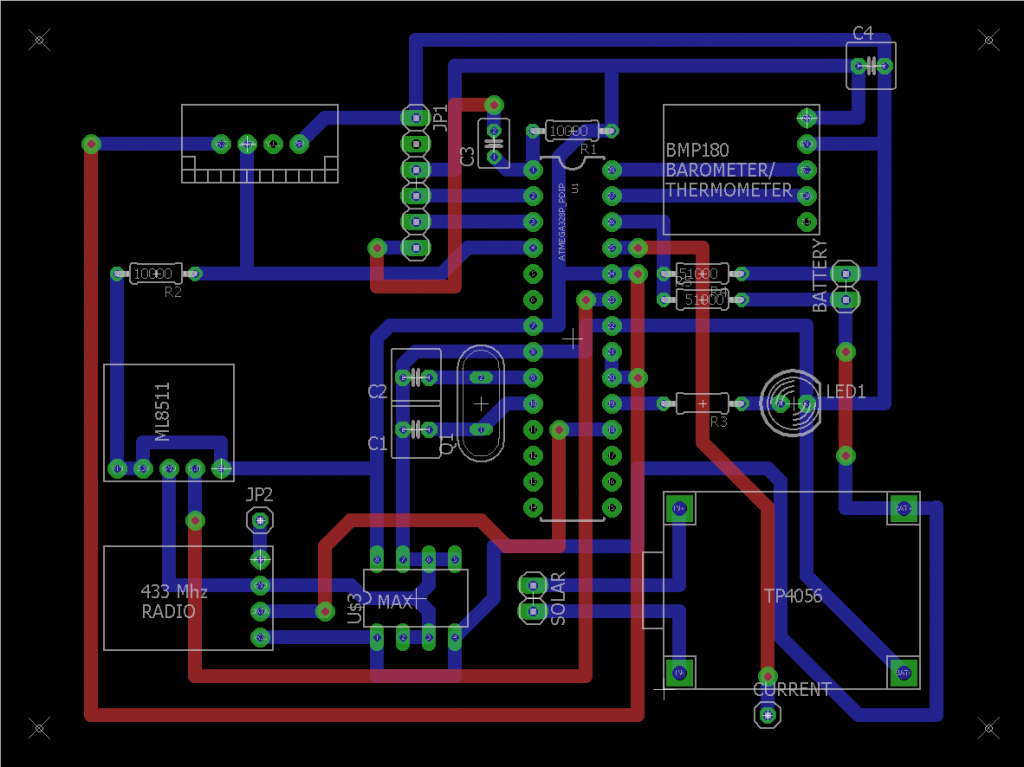 To physically make the PCB, I decided to use my dad’s homemade CNC machine. I downloaded PCBGcode, a plugin for Eagle CAD, and used the default settings to export the etch and drill g-code files for the top and bottom layer. I then took those files over to a program called Autoleveler (a free version of this program is available somewhere on the internet). It took the etch files, and turned them into files that made use of the CNC machine’s probe tool.

I started up the CNC machine, put in a 0.1mm, 30 degree etching bit, then used two alligator clips to probe the surface of the copper-clad board. This told the machine where the surface was, which enabled the machine to etch the PCB with a uniform depth. 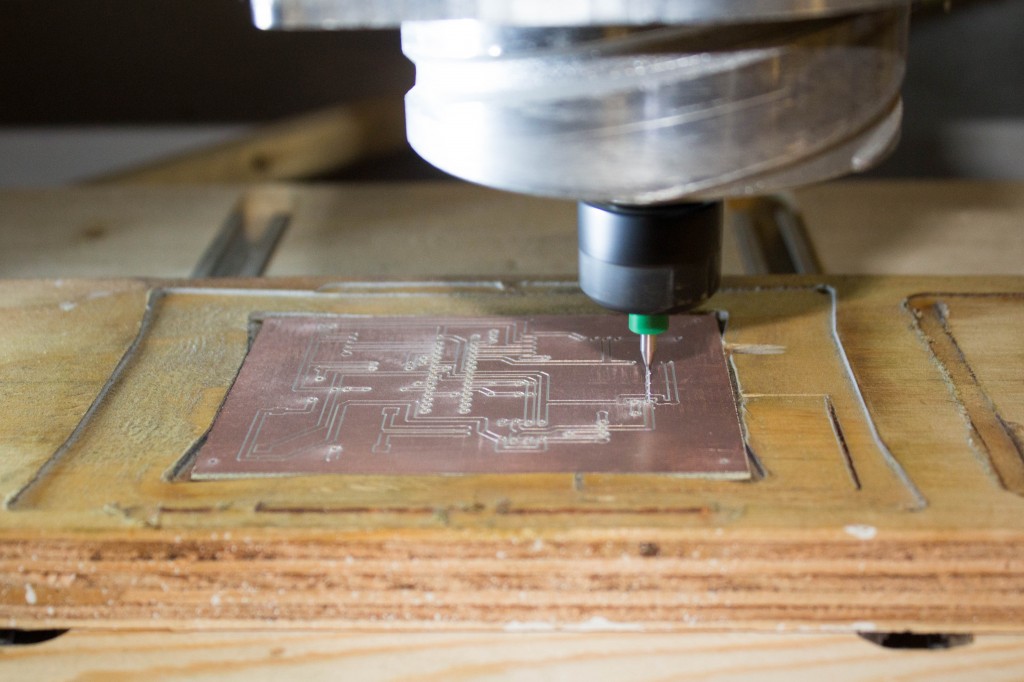 I started by etching the bottom layer, then I used a homemade wooden jig to perfectly flip the PCB over, then I etched the other side. I did have to move the home position 100mm to the left when I changed sides.

After the etching was complete, I swapped the bit out for a 0.8mm drill bit. The PCBGcode plugin generated separate files for drilling, so I ran the appropriate file. I did not have to probe the surface this time, but I added some break-trough in the settings to make sure the drill bit went all the way through. 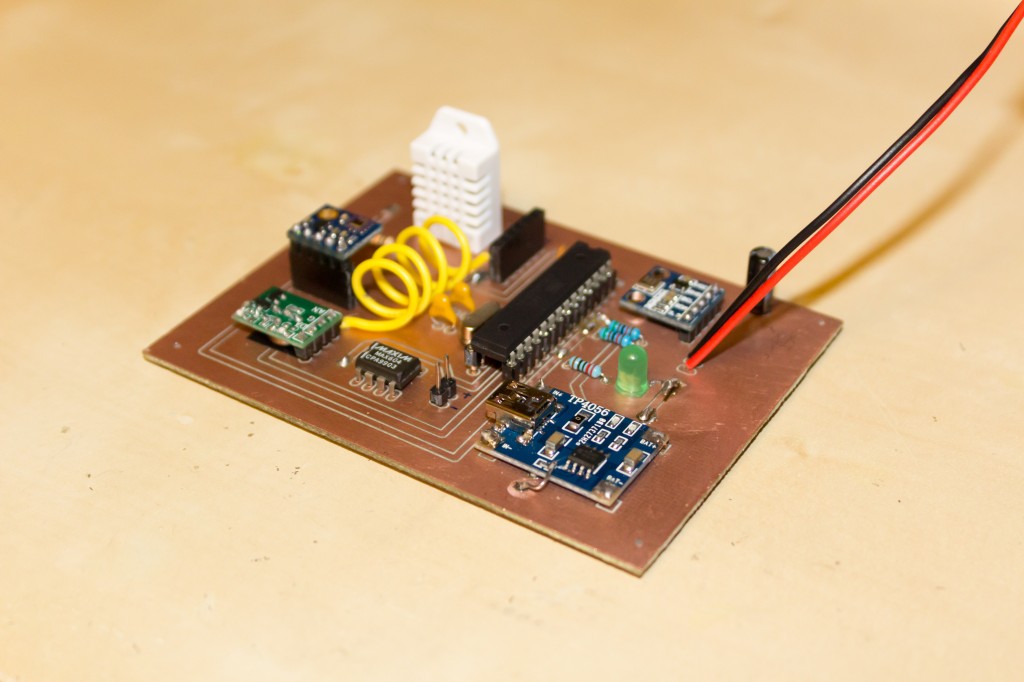 After that, it was time to take the PCB out, and solder all of the components on. I was a bit off center with the holes on the top layer, but that was okay, since I wasn’t going to solder the top layer (except the vias) anyways. 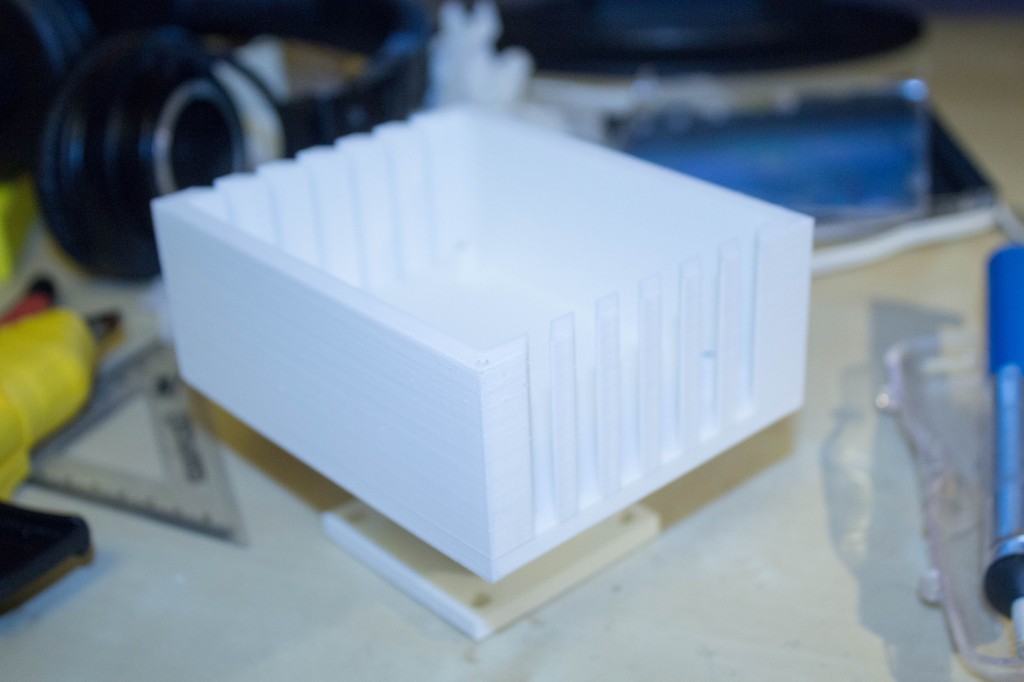 The PCB and battery fit perfectly into the base. However, the case still needed a lid. For some reason the Makerbot always stopped in the middle of printing the lid, so I decided to make it by hand out of some 1/4″ high density foam. 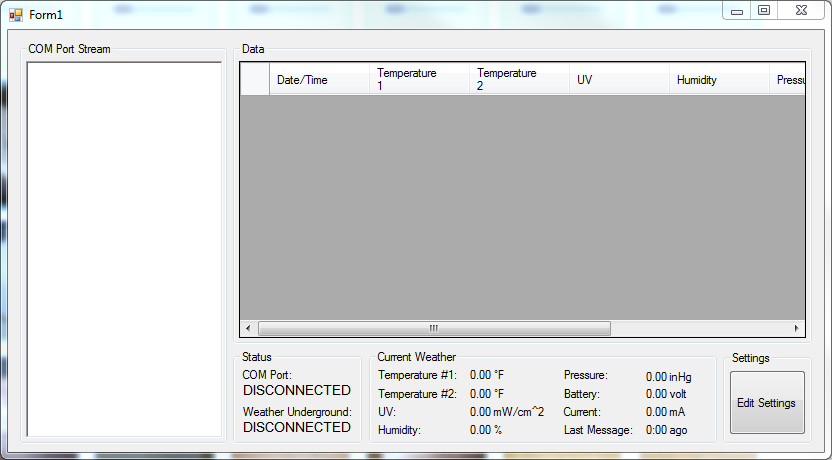 In order to upload data to the WeatherUndergroun network, I had to write an application for the computer on the receiving end of the 433Mhz radio using the PWS API. The software was written in C# using Visual Studio, and it was quite similar to the old weather station software.

Speaking of receivers, I re-used the same receiver from my old weather station in this project. Mr. Mietzker, my tech teacher, donated an old laptop to function as the receiver for my weather station. I set up the laptop in a place where it should not be disturbed, and made a patch cable to connect it to the internet. I set up my receiver program to run when the computer starts, and set the computer to restart in the event of a power-failure. If nothing catastrophic were to happen to the weather station, it should continue to upload data to WeatherUnderground as long as the laptop has power and internet (both of which happen to go out frequently in my school). 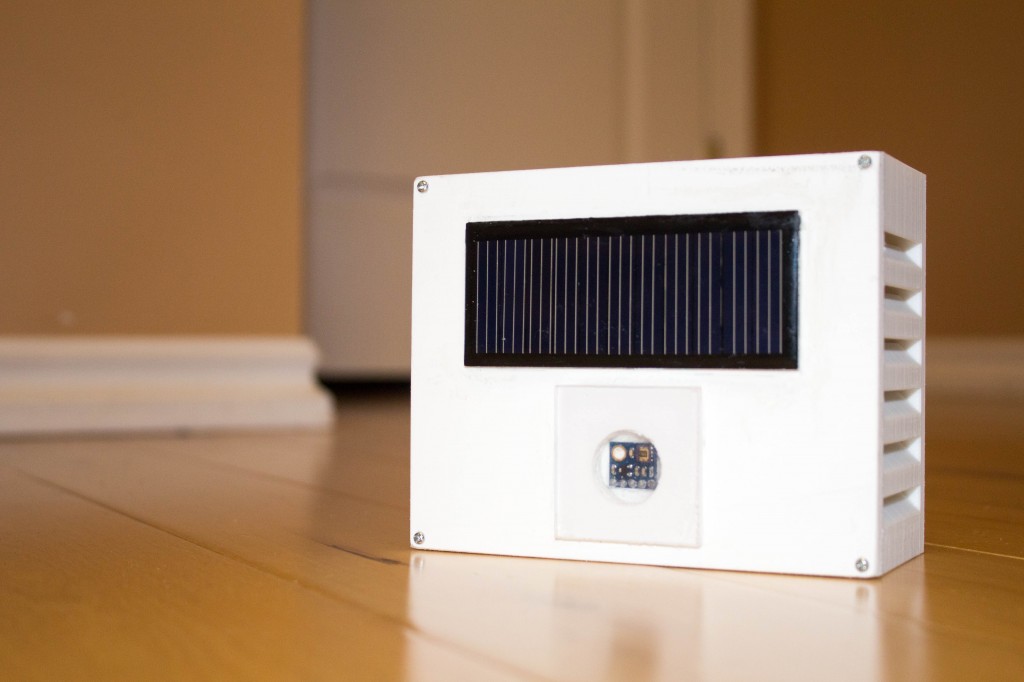 In the end, I really liked how this project turned out. I learned a lot about 3D printing, and it inspired me to 3D print more readily in my future projects. I also learned how design a circuit with low power-consumption in mind.

I hope this weather station lasts a long time, and that it helps the students of Riverside to never get caught in the rain without an umbrella.