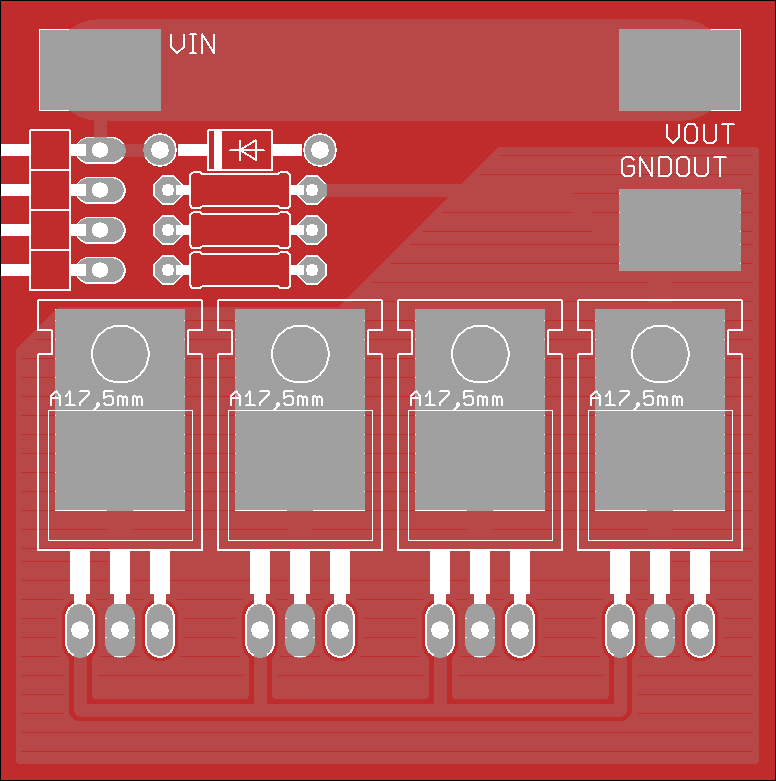 Some electric skateboard ESC’s, particularly the VESC, do not feature a switch for turning your board on and off. They typically rely on an external switch, like the Vedder anti-spark switch, and others.

This is a fairly popular type of 12v LED switch, which is used on things like RVs.

The problem with these switches is that they typically use one or two really high power ~200amp MOSFETS (a type of transistor) from cutting-edge distributors, which makes the design expensive! The main idea of my design was to use not one, not two, but four 120 ampere MOSFETS in order to satisfy the same current requirements. I also wanted to design a PCB that has an integrated heatsink, and I wanted to incorporate an LED toggle button (so that you know when your board is on or off).

I recently purchased a VESC, and I required one of these switches. I wanted to build my own to save money, and to be able to provide them for anyone who wanted them. I was motivated by the user JdogAwesome on the electric skateboard forums, who designed his own. Here’s how I designed the 0.1v of the switch, and my thought process behind it:

Choosing MOSFETs by their Resistances

The biggest problem with these high-current switches is that they can overheat when you run too much current through them. To make matters worse, the power dissipated through the MOSFETS is P = I^2 * R, meaning if you double the current to your motor, you actually quadruple the heat produced.

Using the data gathered from my science fair experiment on electric skateboards, and other sources online, I found that the maximum continuous current for a switch should be ~40 amps, and the maximum peak current should be ~80 amps. My final switch design should take into account heavy riders and steep hills, so I decided to de-rate these requirements, and aim for 80 amps continuous and 160 amps peak.

This power curve shows how much power is dissipated at a particular current.

In order to visualize how these requirements would affect the heat dissipation, I decided to plot the power curve using the values for a 1mΩ switch, using the formula y = 0.001 * x^2.

I wanted to go with the TO-220 package, simply because it was easy to solder. The maximum package rating (because of the relatively small leads) was 75 amps. The package can handle roughly 1.5 watts of power loss in open air, up to 4 watts with a PCB heatsink, and much more with a real heat-sink.

Since I was planning on using four of these transistors, the maximum power loss was 16 watts. Using the curve, I found that at a continuous 110 amp draw, only 12 watts of heat will be produced, meaning that if I used 4x 4.0mΩ transistors, I could get away with keeping them cool, even if the electric skateboard motor was pushed to its absolute limits. I eventually chose to use IRFB3207 N-Channel MOSFETs for this project.

Keep in mind that this design is rated for the absolute worst case-scenario. At an average power consumption of 20 amps, the switch only uses as much power as a 5mm LED, and at a hefty 40 amps, as much as an alarm clock. The overall efficiency of the switch is greater than 98%.

I really liked the look of the sexy blue glow from the LED switch on my previous electric skateboard, so I wanted to include it in the VESC switch; it turned out to be the hardest part. The problem? The LEDs inside the buttons were designed for 12 volts! Wired in series to the LED was also a resistor of an unknown value…

This graph shows the linear relationship between voltage and current of the 12v LED toggle switch.

In order to limit the amount of current that flows though the LED at 12s and 6s, I needed to know the voltage drop of the LED, and the value of the resistor inside. I took out my trusty multi-meter, measured the current of the LED at various voltages, and came up with the graph on the right.

By running this short test, I was able to determine a 20kΩ resistor in series with the LED button would suffice to power the LED between 6S and 12S, and not use up too much power while doing so.

The PCB design for this switch was nothing spectacular. I sacrificed the ability to easily solder by filling in the PCB to make a large heatsink for the MOSFETS. I did buy some flux and a large soldering tip to combat this. In addition, I also did not account for the added resistance from the positive rail. I could have run vias to the underside of the rail to add a second trace and reduce resistance, but alas. Instead, I think I am going to have to solder a wire across both contacts in order to reduce the power loss.

I have ordered a batch of 10 of all of the components for prototyping purposes. Once I have a functioning and safe version, I will make a more detailed video on my channel, and post some of these switches up for sale on this website!